[latexpage]The following article was inspired by a question asked by a reader regarding my previous article – Data Windows : What, why and when?. Specifically, the reader asked “Could you please put an example about overlapping technique? Maybe with the same 10 or 9.5 Hz sinusoidal wave example so that we can see how overlapped window could make a difference in processed frequency spectrum.”

Overlap analysis, just as the name suggests, means consecutive analysis blocks of the time data are overlapped by the designated percentage of the time record.  In the case of the examples presented here, the time block is selected as 1 second corresponding to a ${\Delta}f$ of 1 Hz. 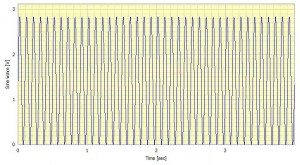 As stated in the previous article, analysis of a stationary signal, Figure 1, with a selected overlap of 0%  would consist of analysis of time blocks with an applied Hanning windowing function (Figure 2). 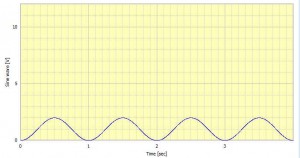 Once we apply our window then the signal would look like that shown in Figure 3.  The spectrum would be calculated from this signal. 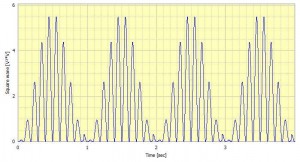 Now, what happens if the signal is not  stationary, such as displayed in Figure 4.  You can see an event that occurs at periodic intervals (1 second intervals) that might well be important to the analysis. (NOTE: This signal was created by adding an impulsive component containing a 100 Hz sinusoid) 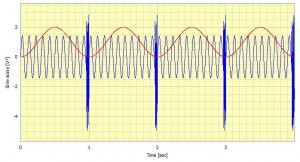 Overlap processing (50% used for this example) would capture the events of interest (100 Hz sinusoid pulsed at 1 second intervals) because with the overlapping of the time records used to calculate the spectrum,  the Hanning window function would align with the events thus including them in the calculated spectrum. This is shown in figure 5. 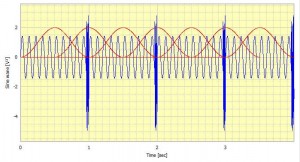 The difference in the resulting spectrum is shown in Figure 6.  The blue curve is with no overlap and the red curve is with the 50% overlap as shown in the above Figures 4 & 5 respectively. 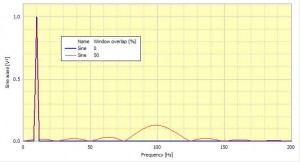 It is plain that with no overlap all of the 100Hz information is missing. This shows the potential for missing events by not using adequate overlap when applying a windowing function.

Senior Technical Specialist (Retired) at Prosig
John Mathey graduated with a MS degree from the University of Toledo in 1972. John has over 35 years of experience with instrumentation, measurement, and analysis. Twenty-five of those years were spent at Ford Motor Company solving and providing training for vehicle noise, vibration, and harshness (NVH) issues. He was a technical specialist at Prosig USA, Inc. where he provided technical support to Prosig customers in the U.S.A.