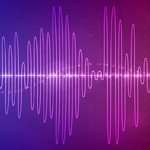 Sometimes we are asked about the differences between an acoustic camera and a sound intensity probe and which of the two is better for a particular application. There is no straightforward answer as they are quite different pieces of equipment, used for measuring different things. An acoustic camera is a tool used to locate and analyse sound sources, usually both steadystate and dynamic phenomena. The intensity probe is used to find the sound intensity at a particular position, usually a steadystate phenomena.

An acoustic camera consists of some sort of video device, such as a video camera, and a sound pressure measuring devices, such as microphones, sound pressure is usually measured as Pascals (Pa). The microphones are normally arranged in a pre-set shape and position with respect to the camera.

The user points the acoustic camera at the object under test. They then ‘see’ the video overlaid with the sound pressure levels. Say, for example, an automotive vehicle engine was running on a test bench. If you were to point an acoustic camera at the engine you would see the image of the engine on the display, but also see the sound pressure levels  and the frequencies of these levels (similar to that shown in Figure 1 below).

Generally speaking, an acoustic camera cannot measure below approximately 300Hz. At the upper end they sometimes reach 10kHz with some special models capable of 20kHz.

It is possible to get results of this form without a full blown acoustic camera. It is, in fact, possible with a microphone array or even several microphones moved from position to position. In this case a simple photographic image taken from a digital camera can be overlaid with the acoustic data, as shown in Figure 1.

Acoustic cameras have a particular spatial resolution, this is a factor of the area over which they are measuring. If you are far away from the test piece your get lower quality results than if you are closer. But when you are closer the camera can’t ‘see’ the whole test piece. This actual resolution, the smoothness, of the sound map is normally a limitation of the algorithm used in the acoustic camera software.

An acoustic camera can quickly get from the data capture stage to a final result. The ability to complete the entire test at various engine speeds in a much shorter space of time can be an important factor and must be considered. The acoustic camera can take a very quick “snapshot”. Furthermore, some acoustic cameras available in the marketplace do have order tracking functions. These might not be as well developed as with a more traditional NVH analysis system, but nonetheless they perform well enough for some users requirements.

Acoustic cameras use beam forming techniques. The sound pressure level distribution corresponding to the propagating direction can be estimated. This is therefore an approximated model of the sound field. It is possible to estimate the location of the sound sources from the measurement. For some case it does provide correct information, but, sometimes, due to limitations of the sound field conditions (e.g. reverberation), it does not.

The pre-set distance between the microphones is a factor of the wavelength of the sound waves that will be measured by the probe. Generally speaking the higher the frequency of interest, the smaller the gap between the two microphones. The rule of thumb is that the microphone pair should be able to sample different, but similar sections of the wave at the same time. This limits the frequencies that the classical sound intensity probe can measure.

By comparing the differences between the two microphones, it is possible to calculate both the sound pressure and particle velocity between the two microphones. These two parameters are then multiplied together to calculate the sound intensity. Sound Intensity, therefore, has direction. A sound intensity probe measures the sound intensity traveling parallel to the probe. Therefore, sound originating in front of the probe will be measured as a positive intensity, but a sound from behind the probe will be negative, as shown in Figure 2.

A usable measurement range of a sound intensity probe is normally limited to between 50Hz to 10kHz.

The robotic method is the best method for placing the microphone in the same position each time. However, it is only effective in the case of steadystate phenomena, such as an engine on a test bench, running at a particular speed. It’s usually impractical, for economic reasons, to have multiple sound intensity probes so that dynamic phenomena can be measured. Figure 3 shows a sound intensity probe connected to a robot arm.

Fundamentally, an acoustic camera is a tool used for locating sound sources or, more correctly, sound pressure sources. Sound pressure is the pressure level deviation from ambient caused by a sound wave passing through the medium.

The sound intensity probe is used to find the sound power per unit area. Sound power is a measure of energy over time.

These two devices are performing similar, but different tasks.

With this information in mind, an acoustic camera has advantages when evaluating both steadystate and non-steadystate phenomena. It can also provide results quickly. However, acoustic cameras are limited in frequency range and are further limited to only providing information about sound pressure levels.

The microphone array based solution has the same advantages and disadvantages as an acoustic camera, but often at a fraction of the cost.