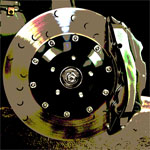 The objective of the brake noise tests was to record the braking events of cars being driven on various types of road and classify those events according to their type (Groan, Creep or Squeal etc) and severity. To do this the customer needed a system capable of working for long periods inside a vehicle in fairly tough conditions (high ambient temperatures, rough road) that was both quick to install and to remove.

On previous tests a system from another supplier had turned out to be unreliable and had failed to cope with the harsh environment. The analysis processing had also proved tedious and time consuming due to the huge amount of data created when testing several vehicles over many days.

The tests consisted of taking up to six vehicles on test drives lasting two hours or more. These tests were repeated for several days. During that time any brake noise or vibration events from the brakes had to be captured at a high enough sample rate to be able to fully analyze the noise later. However, to capture all of the data for every test on several channels at a high sample rate would have created a huge amount of data. Since most of this data is of no interest it was undesirable to capture all of it and then search for the relevant parts. It was obvious that a different scheme needed to be found.

The relevant brake noise events could be detected and classified in one of two ways. The first and simplest method was to provide the driver with a simple numeric keypad and on hearing a brake noise the driver would simply press a number that rated the noise on a scale of one to nine. The second and more sophisticated approach was to implement an analysis based trigger facility in the data acquisition system. Accordingly, the Prosig P8000 data acquisition software was enhanced to provide a range of various ‘intelligent triggers’ specifically for this type of test. ‘Intelligent triggers’ can consist of something like a simple level crossing on one of the microphone channels or a more complex measurement of energy in a particular frequency band. The full range of triggers is described later in the section on Software.

Regardless of whether the event is triggered manually or automatically the capture scheme remains the same. Throughout the entire test the data for “slow speed” channels such as temperatures and pressures is captured at a low rate. Typically, this would be around 20 samples per second. When an event is triggered data is captured on the “high speed” channels (microphones and accelerometers) for a specified period of time including a certain amount of pre-trigger data. For instance, the user might configure the system to capture 20 seconds of data for each event with 10 seconds of “pre-trigger” resulting in 30 seconds of data for each event captured. The pre-trigger period allows for human reaction time for manual events to be included and it also captures the data leading up to an event that might be relevant.

All the captured events have a time base that reflects the time into the test. In this way, individual events can be overlaid with the slow speed data so that noise events can be viewed against temperatures and other data.

The Prosig Brake Noise Measurement System is based on a Prosig P8020 24-bit data acquisition system. The P8000 capture hardware focuses on the capture of noise & vibration and associated data for mobile and laboratory applications and features a range of 24-bit measurement hardware modules. These systems can be configured with between 4 and 1024 channels and have signal conditioning options for accelerometers, microphones, strain gauges, thermocouples and powered transducers. Additional options also offer support for capture of data from CAN-bus, GPS and IRIG inputs.

For this particular application the P8020 was equipped with 12 analogue inputs, 8 thermocouple inputs, 2 tacho inputs and a CAN-bus input. The analogue inputs were used to capture data from 4 accelerometers (one on each brake caliper) and 6 microphones (one on each wheel and two inside the cabin). An additional analogue channel captured data from the numeric keypad which generated a voltage equivalent to the integer value (from 1 to 9) of the particular key that was pressed. A further input was used to input a speed signal in the form of a pulse train representing 1 pulse for every 0.1m travelled.

Prosig’s DATS software package has over 35 years of development behind it and integrates data capture from the P8000 systems with extensive analysis and reporting capabilities. DATS also offers a wide range of data import and export from other measurement and analysis systems.

The data acquisition is, obviously, vitally important to this application and various trigger methods are included specifically to deal with the demands of brake testing. Any channel on a P8000 can be used to trigger a data capture and one of several triggers may be used. The table below details the available triggers.

Of particular interest for brake testing is the ‘Display’ triggering mentioned above. Figure 1 below shows the realtime spectrum display in the capture software. The triggers are divided into three categories for braking applications. These are named “Squeal”, “Creep” and “Groan”. In this figure they are are shown as three bands with a level bar in green, black and cyan respectively. Both the frequency limits of the band and the trigger level can be specified. Additionally, the trigger may be set to activate on either a peak level within the band or on the total energy in the band.

Once captured it is a simple task to view the data using the DATS software. Figure 2 shows a typical overlay screen.

The screenshot (Figure 2) shows several low speed channels (temperatures and pressures) displayed alongside the microphone data from drivers left and right ear positions. This represents a single brake event. It can be seen from the time along the horizontal axis that this particular event occurred at around 1h20m into the test.

Once the data has been captured it is a simple task to use a DATS graphical worksheet or BASIC script to process each event. Several example worksheets and scripts are included with the standard software and these can be easily customised to suit specific requirements. The DATS software provides an extensive analysis capability with a wide range of time and frequency domain functions.

Once processed the resulting information is presented in an Excel spreadsheet with summary information for each test run coupled with a detailed analysis for each noise “event”.

The Prosig system (P8000 hardware and DATS software) was selected for its unique combination of a rugged, reliable hardware platform and flexible capture and analysis software. The tests performed in this application were made on several vehicles. Each test lasted over two hours and was repeated continually over a period of many days.

The P8000 hardware can take data simultaneously from a wide range of transducers as well as CAN-bus/GPS inputs. This allowed vehicle data to be easily combined with measured vibration and acoustic data and presented to the user in a coherent and consistent manner.

The ‘intelligent triggers’ available in the DATS capture software were vital in capturing only data containing useful information.

The analysis and reporting capabilities of the DATS analysis software mean that it was simple to produce high quality reports and was easy to modify either the analysis or the report procedure if the test requirements changed.

How Do I Calibrate An Impact Hammer?