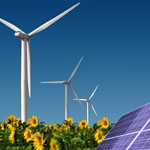 Here we have gathered together a collection of interesting, informative and some slightly offbeat examples of renewable energy. We’ve tried to find a good selection of both power generation and transportation technologies. With all of the resources available for renewable projects at the present time, this has to be one of the most exciting areas of engineering at the moment.

Take a look at the videos and let us know your views and experiences in the comments section at the bottom of the page.

A short guide to how geothermal energy is harnessed.

A different take on the wind turbine. Reportedly more suitable for urban environments – quieter and more friendly to wildlife.

A different take on vehicle development. Borrowing not only from a wide range of vehicle engineering technologies, but also the open source concept from computer engineering.

4. Giant rubber snake could be the future of wave power

One of the many ways being evaluated to take power from the waves.

Video: Giant rubber snake could be the future of wave power

I cannot describe this any better than the video’s own description – Margot Gerritsen, Associate Professor of Energy Resources Engineering at Stanford, discusses the recent upswing in the development of large-scale solar projects, with elaboration on fast-track projects, the political, economic and financial barriers to implementation, and utility integration along with several current case project examples.

I don’t suppose any of us will be flying off on our holidays or our next business trip in a solar plane, but the Solar Impulse project is another step down the road. Who knows where that road might lead?

7. Wave power: how it works

The first of three “How It Works” videos. No sound on this one, but nevertheless a very informative explanation on the workings of one of the established forms of wave power generation.

Video: Wave power: how it works

8. Hydroelectic Power – How it Works

Here is the second “How It Works” video. A brief, but thorough rundown of the workings of a hydroelectric power plant.

Video: Hydroelectric Power – How it Works

9. How does a biogas plant work?

And the last “How It Works” is an in-depth look at how biogas generation works. It’s a bit of an advertisement for the companies services, but still a very useful insight into this growing form of gas production.

Video: How does a biogas plant work?

Another contender for cars that run on renewable energy. Unfortunately, the video wanders into the fantasy of perpetual energy near the end, but still an interesting technology that we might well see more of.

Video: A car that runs 200 miles on compressed air

What Is A Hammer Test Or Hammer Impact Test?