This article is the first in a series that will introduce two very important facilities that can be used when creating DATS worksheets – Named Elements and Global Variables. It is perfectly possible to perform simple measurement and analysis with DATS without knowingly using either of them. However, knowing how they work and what they can do, will lead to much more efficient and flexible worksheets. The first subject we’ll look at is Named Elements.

So, what are Named Elements? Every signal in every dataset in the DATS software contains Named Elements (or NEs for short). A NE is a piece of information about the signal that consists of three things

So, for instance, we might have a NE with a name of  AmbientTemperature which has a type of floating point and for a particular signal it’s value could be 23.7. Or we could have one with a name of Engineer of type string and it’s value might be Chris. Where do these Named Elements come from? The short answer is – lots of different places. Here are a few examples

Let’s consider how DATS uses NEs. As we’ve already seen, all data is created with NE’s and certain functions will add NEs as part of their analysis. Additionally, all NEs are copied from the input signal to the output signal when we perform an analysis. So as we step through our processing we build up a complete ‘story’ of our data in our NEs. Often, DATS analysis functions refer to the NEs when processing the data. For instance, some functions may need to know the type of a spectrum they are processing in order to carry out the correct analysis. This information would be found from the signals NEs.

Additionally, there are several important details about a signal that are stored in NEs. Information such as signal description, signal units and independent variable name & units are all stored as NEs.

The screenshot below shows a a few of the Named Elements for a signal in one of Prosig’s example datasets. 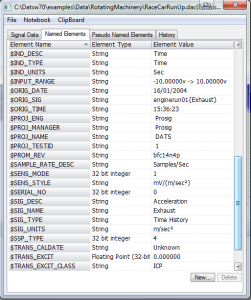 In the next part of this tutorial we will look at how we can use Named Elements in worksheets.

Relative signal levels of a sinusoid with and without background noise

What Type of Accelerometer Should I Use? IEPE, Charge or Bridge-based?