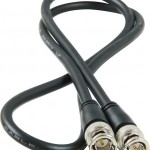 Using 50? or 75? cable will not have any negative effects on the P8000 at all. (Generally speaking, only large voltages will damage the P8000). The impedance of the cable can only ever effect the signal the cable is carrying.

As a guide the impedance of the cable is only important when you are dealing with very high frequencies, the frequency ranges used by the Prosig P8000 is such that 50? or 75? cable will make no noticeable difference to any measured signals.

The reasons for this are this are quite complex, but to summarise, an electrical conductor at Radio Frequencies (RF) no longer behaves like one would expect from something like a simple cable or wire. As the length of the conductor approaches approximately 1/10 the wavelength of the signal it is carrying basic circuit theory no longer applies and at this point engineers start to consider the subject of Electronics at High Frequencies, which is a complete branch of electronics in itself.

As a guide a frequency bandwidth of 1MHz has a wave length of 300 metres, therefore a cable length of 30 metres would be needed before it was necessary to consider these phenomena. Therefore, using a Prosig P8000 at a sample rate of 400,000 samples per second per channel the cable length would have to be 187.5 metres before cable impedance would start to become an issue and even then not a problematic issue.

If asked; would Prosig recommend that 50? cable be used in all circumstances? The answer is “Yes”. By using this cable type in all cases, any potential issues with impedance mismatches can be removed before they even start.

Does Prosig hardware support strain gauges? And which types?