Following on from the recent post regarding of the 2012 Survey Prize Draw we have more prize giving news.

The 2nd Annual Prosig Prize for Engineering at Portsmouth University has been awarded to Ashley Stehr for his project “Developing an engineering mechanism to reduce the effects of rapid rotational motion caused by the shocks inherent with high speed craft”.

The aim of the project was to look at ways of reducing the effects of rolling caused by high speed shocks in a Tamar class lifeboat. Human vibration in ground vehicles is well understood and is easy to measure and analyse using Prosig’s P8000 systems and the DATS Human Response software. In water craft the problem is complex by the rolling motion and its effect on the spine. Ashley received technical specificatrions from the RNLI and Frazer-Nash Consultancy (Bristol). Ashley is in his third year studying for an MSc in Mechanical Engineering. His project was supervised by Dr Ya Huang. Ashley’s project poster is shown below (click for a larger view). 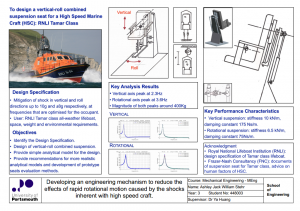 The study is ongoing and is intended to form part of a Year 4 group project next year.

Prosig congratulate Ashley on his work and wish him every success in the remainder of his course and future career.

General Manager at Prosig
Chris fell in love with technology and innovation in the early days of personal computing (Sinclair ZX80's, Commodore PETs & Apple ]['s) This hobby became a career in software development, product development, team leadership, web development, and marketing. He is now General Manager at Prosig & DJB Instruments, both part of Condition Monitoring Technology Group. In 2019 Chris completed an Executive MBA at the University of Winchester where he focused on innovation and strategy.